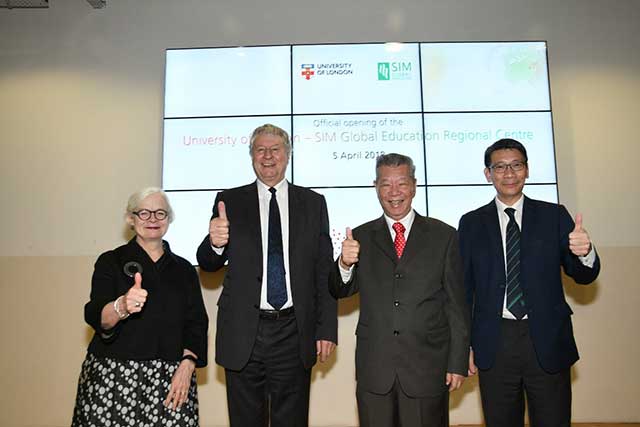 The Regional Centre which is based at the SIM Headquarters focuses on broadening and deepening collaboration with key partners and market development, both in Singapore and more widely across the Southeast Asian region.

“Underpinning this important initiative is our mutual resolve to ensure sustainability and provision of our University of London programme both in Singapore and other ASEAN countries and to consolidate and share our network of key stakeholders and influencers. Twelve months down the road, I'm happy to say that we have already achieved a great deal,” said Sir Adrian.

Under the aegis of the Regional Centre, two Masters scholarships were also launched last year for SIM graduates to study at any of the University of London Member institution.

In his speech, Dr Lee highlighted the strong demand for education training in Singapore.

“I think our great partnership will bring education opportunities to many more people and I look forward to leverage on this partnership and really make a difference to people and the community in this region,” he said.

The centre will continue to work with its shared constituencies in Singapore and the region and develop new programmes in SIM.

Click here for the full listing of SIM-UOL programmes.