Dr Lee On Failing PSLE And His Least Favourite Buzzword

Dr Lee jumped into the hot seat on This is Boss, a segment on local radio station 938NOW where industry leaders are quizzed by presenter Daphne Lim on a fixed set of five questions aimed at revealing the true person within.

SIM Holdings Chief Executive Officer, Dr Lee Kwok Cheong, is known for many things. One would be the role he played in establishing the information technology infrastructure within Singapore’s Civil Service earlier in his career. Another would be that under his charge, SIM Global Education grew to become the leading private tertiary institution in Singapore.

But did you know that he started out fairing badly at his Primary School Leaving Examination (PSLE)? Or that if his life story was to ever hit the silver screen, he would choose one of Hong Kong’s famous actors to play him?

On 21 September 2018, Dr Lee jumped into the hot seat on This is Boss, a segment on local radio station 938NOW where industry leaders are quizzed by presenter Daphne Lim on a fixed set of five questions aimed at revealing the true person within.

Here are the excerpts from his interview.

Could you name one actor that would play you in your biopic?
Hong Kong actor Andy Lau. When I was younger some people said I looked like him – or maybe they should say he looked like me! He is close to 60 years old and is still very popular. I will be 64 soon, and I like actors who are still attractive when they are at my age.

Can you talk about one incident from your childhood that stays with you until today and why?
I grew up in Hong Kong. The education system there is similar to Singapore, so I had to take the PSLE. When I got my results I was told by the education officer that my allocation code number was ‘9999’. I asked what ‘9999’ meant. The reply was that I could pick any secondary school to attend. I thought, ‘Wah, so good’! But what it really meant was that I could only pick from the places that were left over after everyone else had chosen. So I actually did very poorly.

My father decided that since I could not get into a good school, I should repeat my primary six education. It would have been considered a failure by some, but I did much better the second time round. It was a defining moment for me, and has influenced my viewpoint in my professional life. I believe people can do well even after some failures and my job at SIM Holdings is to create opportunities for people to have another go at doing better in life.

What is one incident from the past week that stuck out for you and why?
The Speaker of Parliament, Mr Tan Chuan-Jin, visited SIM about a month ago for a dialogue with our students. His talk was on ‘Heartware & Hardware’ and he had a passionate conversation with SIM students on how we need to have both. If we only have the ‘hardware’, we could easily be replaced by machines and robots – it is the ‘heartware’ that makes the difference.

It resonated a lot with me. I am happy to see our younger politicians talk about the need to have ‘heartware’ and for people to volunteer their time for those who need help. 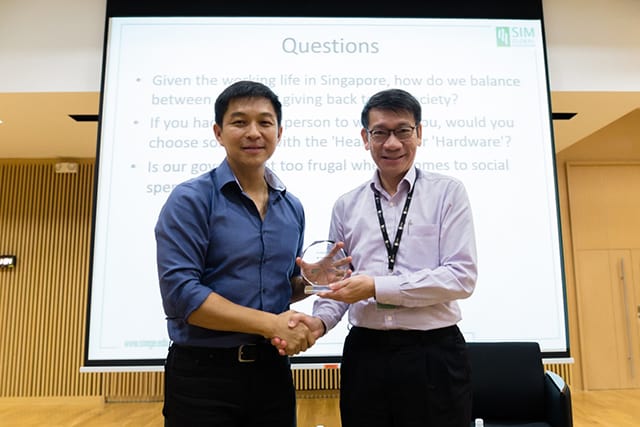 Dr Lee with Mr Tan at the student dialogue – more info on the talk can be found here.

Do you have a productivity hack that you have for our listeners?
Yes – do less; delegate more. If a person is successful, he or she must be quite competent. It is easy for that person to say ‘I can do this job better than others’. But when one delegates, you multiply the ‘one’ into ten, or a hundred, because there are many others who can do the job too. Delegation and empowerment is not always easy to do, but it is the only way for us to cope with the many challenges that are thrown at us.

I believe in a Chinese saying, ‘用人不疑，疑人不用’, meaning that you should trust the people you use, and that if you don’t trust them, you should not use them. 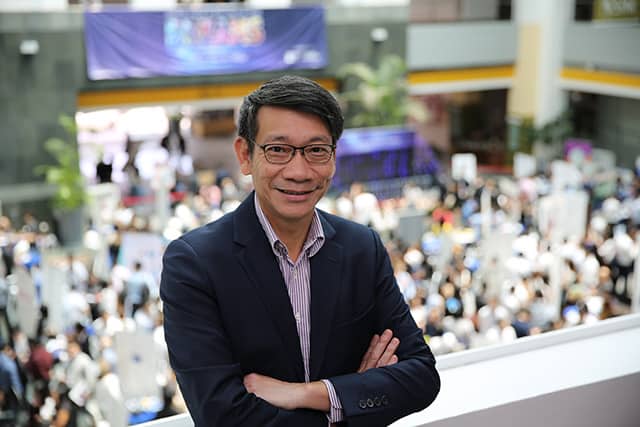 Dr Lee believes that once you have chosen someone to lead a team, you need to trust and empower that person. If you think you cannot trust that person, you should not try to do the job for that person and instead just find someone else.

Do you have a particular buzzword that you cannot stand?
Right now it would be the word ‘disruption’. When we focus on disruption, we focus on the wrong thing. Most think of disruption as taking things away from an incumbent. The focus should be on creating value. Companies like Grab is not about disrupting taxi companies; it is about them making transport easier and more flexible for commuters.

If you can create value without disruption, that is a good thing. If you have to disrupt somebody else, that is a by-product of your work and not an end in itself.

So let’s talk more about love, less about war.

Listen to the full audio clip of the segment here.