Is Cryptocurrency Here to Stay?

What do people want in money? Trust. All that matters to them is that it is legal tender; any other use, or usefulness, of money hinges on that.

What do people want in money? Trust. All that matters to them is that it is legal tender; any other use, or usefulness, of money hinges on that.

This key takeaway on the value of currency in society set the scene to the delivery of the third SIM-University at Buffalo (UB) public lecture this year on 6 November. Titled ‘Cryptocurrency: Fad or Future?’, the speaker was Dr Sandeep Bhaskar, a visiting instructor of economics. UB is SIM’s American partner on a number of programmes including the leading edge Bachelor of Science in Geographic Information Science.

Dr Bhaskar introduced the concept of money through the comparison of the Micronesian island of Yap, which once used stone discs as currency, and the Western idea of the gold standard. In the evolution of money, cryptocurrency is the newest form but like all other currencies, it is only as valuable as the value attached to it by society.

Dr Bhaskar went on to talk about the uses, advantages and problems with bitcoin, one of the more popular cryptocurrencies first developed in 2009.

Bitcoin was started with the aim to decentralise banking as a traditional intermediary through peer-to-peer transactions. Through decentralisation, one can enjoy greater control of his funds, move larger amounts of money, incur lower or no fees, and remain anonymous.

As with all things, bitcoin has its trade-offs, according to Dr Bhaskar. Blockchain, the technology behind bitcoin which stores information digitally in a public database, has expanded. This has caused the processing of transactions to become more expensive and cumbersome, resulting in delays. “The highest number of bitcoin transactions achieved in a day is 500,000 whereas Visa manages about 300 million transactions a day, every day. So, there is a problem of scalability with bitcoin,” he said. At the same time, it is also energy-intensive. “If bitcoin were a country, it would be ranked 41st in terms of energy consumption. Bitcoin mining consumes more energy than the country of Austria in a year,” he added.

There is also the issue of integrity. The ease of anonymity and online transactions can give rise to illegal activities which are hard to trace.

In his conclusion, Dr Bhaskar pointed out that digital currencies such as bitcoin are unlikely to replace national fiat currencies just yet although the potential of the technology is huge. So, digital currency – is it just a fad or the future of currency? At this point, it is a little bit of both. 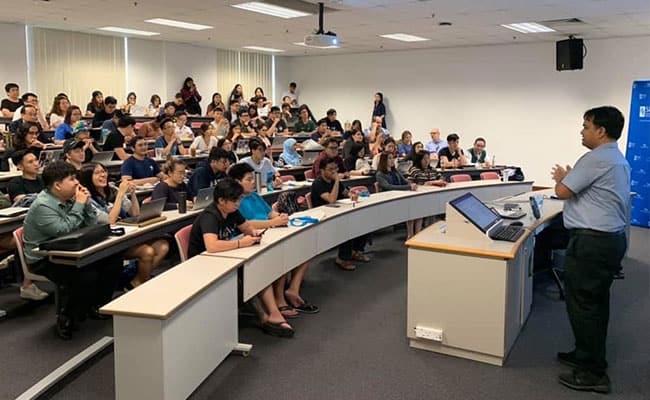 A visiting faculty member in the SIM-UB programme for more than seven years,
Dr Bhaskar’s expertise is in currency, banking and finance.

The SIM-UB series of public lecture is part of the celebrations of the 15th anniversary of partnership between SIM and UB. SIM is UB’s largest overseas partner, with over 5,000 alumni in Singapore.