Turning A Childhood Dream Into Reality

At a young age, Lisha Ann Rodney would often head back to her room after watching the news on TV and pretend that she was a reporter reading out the news headlines in front of her mirror. Today, her dreams of becoming a reporter have turned into reality as she now works in an actual newsroom environment at Channel News Asia Singapore, covering business and finance news. 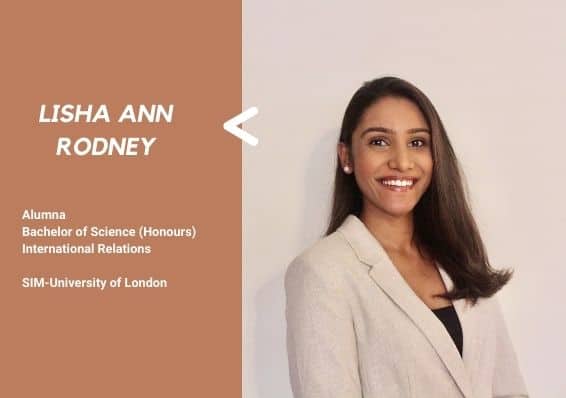 At a young age, Lisha Ann Rodney would often head back to her room after watching the news on TV and pretend that she was a reporter reading out the news headlines in front of her mirror. Today, her dreams of becoming a reporter have turned into reality as she now works in an actual newsroom environment at Channel News Asia Singapore, covering business and finance news.

“My dad's advice to me was “Knowledge is power”, and my parents believed that the best way to acquire that knowledge was to be well-informed by the daily happenings around the world and in Singapore through the news,” Lisha says.

This sparked her interest in international relations and current affairs early. As her passion for international relations continued to deepen with time, Lisha chose to pursue the BSc (Hons) in International Relations programme at SIM-Univeristy of London. For Lisha, earning a degree wasn't the end goal but rather, she believed that the programme would open many doors of opportunities for her- and open it certainly did.

Before her final exams, Lisha earned an internship opportunity as a news editorial intern at CNBC (under NBCUniversal) in early 2019. She impressed on the job and was offered a full-time position at the company as a news assistant after she received her final exam results.  Having gathered valuable experience, she decided to take on a new challenge in the form of her dream job as a TV journalist at Channel News Asia. Her time as a student in SIM has been nothing short of fulfilling as she believes that the many assignments and essays that she had to write developed her ability to write in a clear and concise manner. Lisha's involvement in SIM Catholic Society where she served in the executive committee also helped her strengthen bonds of friendship with her peers.

“Most of my closest friends through my university years were those from SIM Catholic Society. We were all from different partner universities in SIM- UOL, University of Birmingham, RMIT and University of Wollongong- but we studied, played and did community outreaches together. This made my university life experience wholesome and fulfilling. We still keep in touch every now and then and catch up over meals,” she shares. Lisha preparing to cover her first live event on air.

Lisha relishes her current job and takes delight in the fact that no two days are exactly the same as a reporter at CNA.

“I love listening to stories and telling stories. In my job, I get to do both! Listening to newsmakers- from cabinet ministers to the man on the street. And I have been given the opportunity to tell their stories to viewers,” she elaborates.

One of her most memorable experiences was when she was tasked with doing her first live piece on air to cover the first mandatory COVID-19 testing at a public housing estate.

“When I look back, it feels surreal to have been in the thick of things. To be in a place where not many people can go to or would like to go and bringing that news to all the viewers - it was a great feeling! It was also an experience that reaffirmed my belief on how important teamwork is in news. From the editor, the crew (cameraman and soundman) to the director and producer in the newsroom studio. It took a village for it to go smoothly and the entire experience was a very memorable one,” she recounts.

To cope with the challenges and demands that come with the job, Lisha believes that it is important to think quickly on one's feet and advises students who are keen on joining the industry to be prepared to be “agile and adaptable”. “With the job, comes irregular hours, so you must be geared up for that! If you're passionate about it and ready to put in your heart and soul into the job - go for it!” she adds.

Lisha is looking forward to continue making the best of opportunities that come her way in the industry. She will also be marking a personal milestone next year as she will be tying the knot with her fiancé.

She shares: “With the irregular days and hours that come with the job, I hit the jackpot with a loving, supportive, and understanding partner. I aspire to be a woman who's able to balance both my work and home responsibilities, and excel as a journalist and wife to a wonderful man! “

Keen to embark on an exciting career like Lisha? Find out more about the SIM-UOL BSc (Hons) in International Relations programme here.