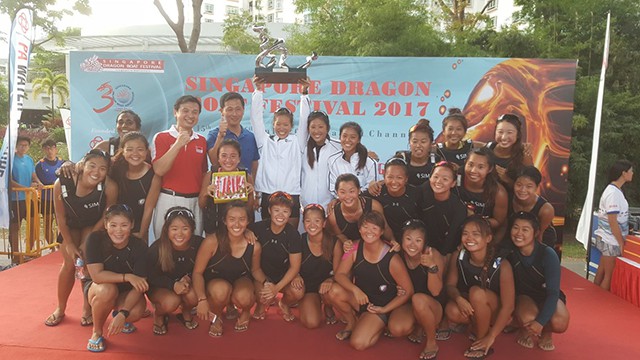 All smiles from the women's team as they lift the Prime Minister Challenge trophy.

History was made at the Singapore Dragon Boat Festival (SDBF) 2017 held at Gardens by the Bay East from 15 to 16 July 2017. The SIM Dragon Boat team swept the highly-coveted Men's and Women's Prime Minister Challenge Trophies. This win marks the women's fourth consecutive trophy at the festival. The men's team wrestled the trophy back from defending champions, Nanyang Technological University (NTU) to emerge victors this year.

The 1000m race that pits all four universities against each other has been a festival highlight since its introduction in 1999 by then Prime Minister, Mr Goh Chok Tong. The highly contested race brought out the best of sporting spirits in the National University of Singapore, NTU, Singapore Management University, and SIM; the race is likened to the annual boat race between the University of Oxford and University of Cambridge for its fierce rivalry between the institutions.

The Singapore Dragon Boat Festival 2017 concluded the 2017 season on a high note. The SIM Dragon Boat team continued its tradition of excellence as the team competed and triumphed in its races - from the Singapore River Regatta, to the DBS Marina Regatta, and finally Singapore Dragon Boat Festival. Credits to long-time coach, Mr Ng Sin Teck and SIM Student Development, who have been instrumental in grooming the team of mostly junior paddlers and masterminding the team's success.

With the historic triumphs and sporting breakthrough, the SIM Dragon Boat team continues to stay hungry for success and strive for excellence.